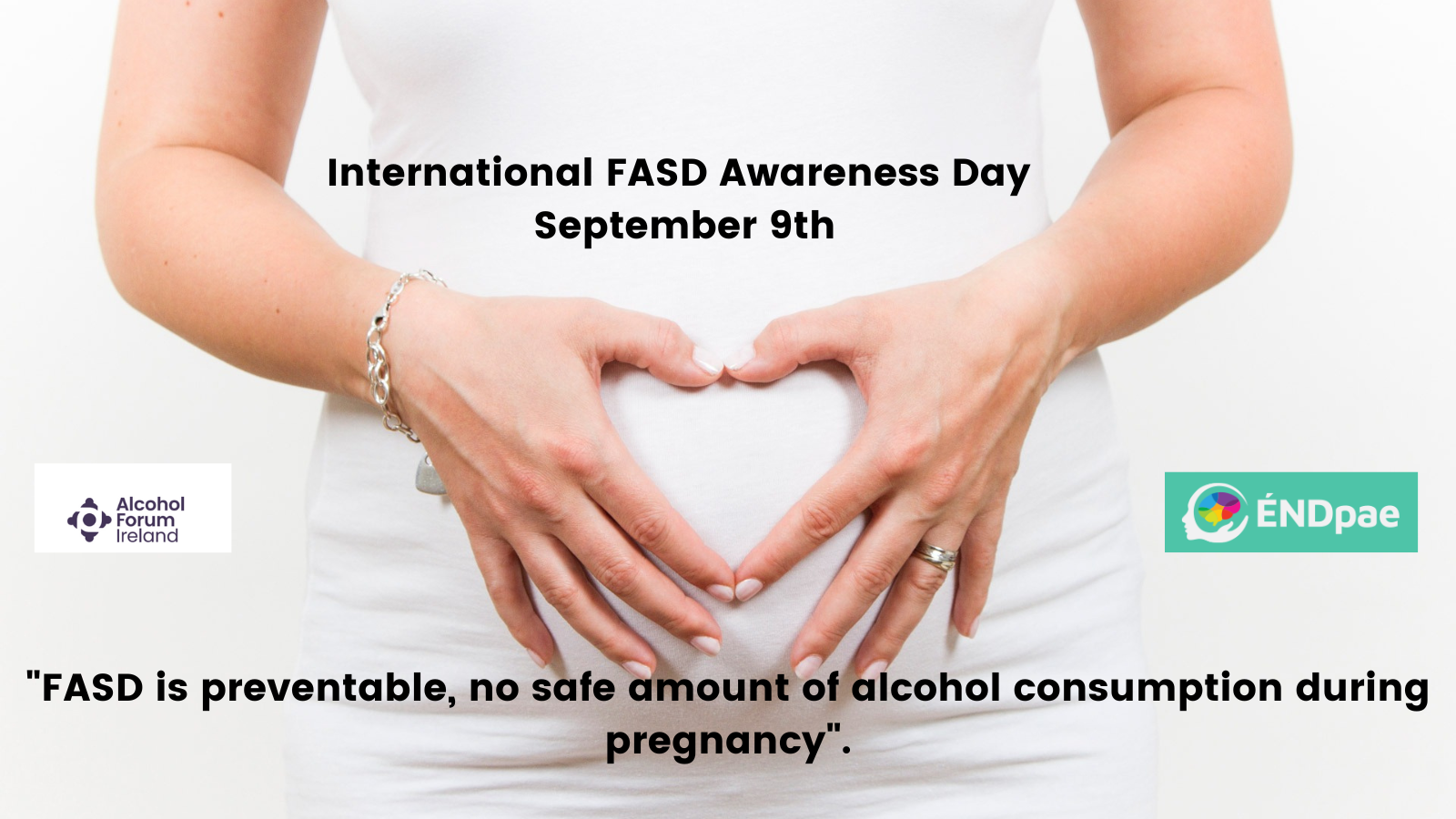 This September, in the shadow of some very worrying international reports placing Ireland in the top three countries for Foetal Alcohol Spectrum Disorder; Alcohol Forum Ireland together with ENDpae are calling on people across Ireland to end the silence and shame and begin to talk openly and honestly about the prevalence of Foetal Alcohol Spectrum Disorder in the Irish population.

On international FASD awareness day on September 9th, the group, with Alcohol Forum Ireland will share the first promotional clips from an upcoming series of short films that are in production and will be released later in the Autumn.     Speaking ahead of Sept 9th,  David Gerry highlighted the aim of the film project ‘These short films will be hugely beneficial in bringing the voices and experiences of people with FASD and their families to a wider audience.     Since the beginning, we have advocated for a ‘nothing about us, without us’ approach to our work on FASD.      We want to be at the policy making table, we want to be seen, we want to be heard’.

In the short trailer which will be released on Sept 9th, Maggie May, a young Irish woman who was diagnosed with FASD at age 5, highlights the need to move beyond blame and shame ‘My mom drank while she was pregnant.   And I knew my mom was an alcoholic.    I loved my birth mom.   She was a lady, she was an inspiration.  Why would I blame her?   At that era, doctors were still saying it’s okay to drink, so why would you go against what a doctor says?’

The group are keen to highlight the fact that, while dependent drinkers are at increased risk, no amount of alcohol is safe during pregnancy. Prenatal alcohol exposure (pae) can cause a wide range of medical conditions in children. These do not diminish with time and are life-long.  FASD is an umbrella term for these conditions.    In a 2019, The Lancet, published a study that found that, of the 50 countries for which data was available, Ireland was in the top five countries for drinking alcohol during pregnancy.  The same year, JAMA Paediatrics medical journal, estimated that 47.5 children are born with FASD per 1,000 births in Ireland.  Only South Africa and Croatia are identified as having a higher occurrence.  This compares with a global average of 7.7 per 1,000, according to the JAMA Paediatrics study.   Reflecting on the high numbers of people here in Ireland living with this hidden disability most of whom will never receive an assessment or diagnosis, David Gerry said ‘there is such a long way to go in understanding this condition here in Ireland and we are calling on government to begin to develop services and supports for those impacted’.

This Autumn, ENDpae will be delivering training to foster carers, youth workers, social workers and others as a way of raising awareness of what supports are needed and what strategies can support young people with FASD in schools and out of schools settings.    This work is supported by the Department of Children, Equality, Disability, Integration and Youth through the What Work’s funding initiative.

Keep updated on our news!

Alcohol Forum Ireland is funded and supported by...

This website uses cookies to improve your experience while you navigate through the website. Out of these, the cookies that are categorized as necessary are stored on your browser as they are essential for the working of basic functionalities of the website. We also use third-party cookies that help us analyze and understand how you use this website. These cookies will be stored in your browser only with your consent. You also have the option to opt-out of these cookies. But opting out of some of these cookies may affect your browsing experience.
Necessary Always Enabled
Necessary cookies are absolutely essential for the website to function properly. These cookies ensure basic functionalities and security features of the website, anonymously.
Functional
Functional cookies help to perform certain functionalities like sharing the content of the website on social media platforms, collect feedbacks, and other third-party features.
Performance
Performance cookies are used to understand and analyze the key performance indexes of the website which helps in delivering a better user experience for the visitors.
Analytics
Analytical cookies are used to understand how visitors interact with the website. These cookies help provide information on metrics the number of visitors, bounce rate, traffic source, etc.
Advertisement
Advertisement cookies are used to provide visitors with relevant ads and marketing campaigns. These cookies track visitors across websites and collect information to provide customized ads.
Others
Other uncategorized cookies are those that are being analyzed and have not been classified into a category as yet.
SAVE & ACCEPT